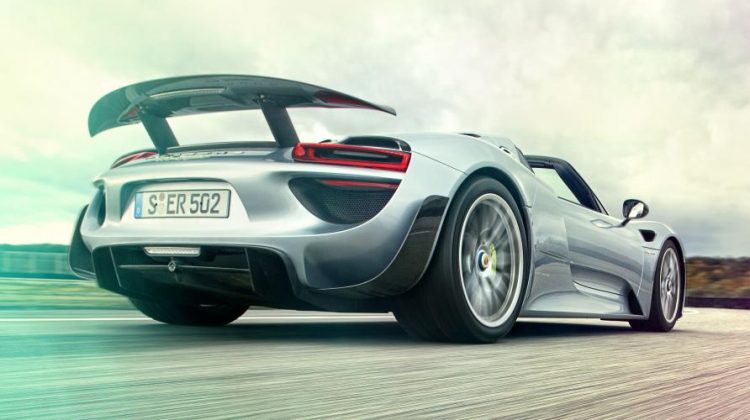 “Porsche’s hybrid masterpiece, the most complete car in the Holy Trinity ”

A hybrid hypercar like no other. Two electric motors and a 9,000rpm 4.6-litre racing V8 contained within a two-seat roadster frame that’s almost entirely carbon fibre. Four wheel-drive, 875bhp and an even more incredible 944lb ft of torque, with over half of that available at only 800rpm. Yes, you did read that right. There really is nothing else like the 918 Spyder.

Not even the McLaren P1  and LaFerrari, the other two members of the ‘Holy Trinity’. The plug-in Porsche, with a 6.8kWh battery twice the size of the McLaren’s, 282bhp of e-thrust alone and an electric range of 12 miles is easily the most hybrid of the three. It’s capable of hitting 62mph in a little more than six seconds on electric alone.

Bring the engine into play and that figure is more than chopped in half. The V8 is derived from the RS Spyder Le Mans car, pushes out 600bhp and gives the 918 a 0-62mph time of 2.6secs, 0-124mph in 7.2secs and a top speed of 214mph. Made almost exclusively of titanium and aluminium and weighing just 135kg, Frank-Steffen Walliser, the man who masterminded the 918 project, has described it as, “the best engine we [Porsche] have ever done”. On the NEDC test cycle it emits just 70/g/km of CO2 and claims 81mpg.

The rear electric motor is mounted between engine and seven-speed twin clutch gearbox, while at the front, drive is purely electric. Above 165mph that motor shuts off, making the car rear-drive only. Like the V8, the aluminium double wishbone suspension is similar to the RS Spyder racer, adaptive dampers are standard and overall the 918 has very little in common with any other Porsche road car. Inside a mode dial on the steering wheel allows you to select four different drive modes – Electric, Hybrid, Sport and Race. In the latter two, the engine is always on.

Developed over the course of three years from 2010, Porsche built 25 prototypes and 25 pre-production cars before assembly of the 918 production cars. In the UK, it was priced at £781,000 including tax.

Porsche’s second-ever hybrid (a Panamera was the first), underneath the carbon body panels the components are packed in very tight. The bodywork doesn’t appear that stretched or spare, but strip it away and the 918 Spyder is like a mechanical Gunter von Hagens exhibit – the skin may have been peeled away, but the underpinnings hold the same shape.

The rear end is the more dramatic, the front, with its recessed headlamps, a touch soft. The top exit exhausts are a real talking point and unlike its McLaren and Ferrari rivals, the roof panels can be lifted out and stored under the bonnet, opening occupants to the elements – and the noise of that high-revving V8.

WHAT IS THE VERDICT?

“ Quite possibly the most complete hypercar there has ever been”

Meet the all-wheel-drive, all-weather hypercar. This approachability, this usability could mean the 918 Spyder comes across as less special than the McLaren P1 and LaFerrari, and true, it doesn’t have their machismo, doesn’t deliver the same viscerality and intimidation as the McLaren, nor the incredible driving experience of the Ferrari.

It’s a more tightly briefed car, more controlled and, arguably, more far-reaching in its abilities. The 918 Spyder has such huge capability in so many areas: it really will average 30mpg, it’s knife-edge sharp on a track, able to scare the living wotsits out of you, it dazzles passers-by, dawdles through town silently and howls through the countryside. And if the weather’s kind, you can take the roof panels out and pop them under the bonnet.

But it’s not compromise that’s been at work here, it’s mastery. It’s astonishing, so much more than just the hypercar you can drive everyday or proof that hybrid systems have life AP (After Prius). It’s a step into the future and, right now, quite possibly the most complete hypercar there has ever been.

Among the hybrid this and the electric that, the newness and wonder of all the technology contained within the 918, the humble piston engine is rather at the edge of the picture. It shouldn’t be – it’s one of the most astonishing naturally aspirated road car engines ever to have pumped a cylinder.

Here’s the best way to appreciate it – and to get a grip on what it is that the 918 does, what it offers that neither McLaren or Ferrari can match. Get it into a high gear at low revs. Fifth is good. Now floor it. You’re unable to compute the initial acceleration because you’ve never felt anything like it – nothing else responds like this at 1,000rpm, turns your spine to mush. It’s the transition from steady state to sudden speed that’s so stark, so otherworldly, and your brain’s failure to associate this much force with such low revs. Welcome to the world of electric thrust.

And now start to say goodbye to it. Because as the revs climb and the needle swings past 3,000rpm, you sense the handover process as the baton of acceleration is gradually passed from electric motor to naturally aspirated V8. There’s no let-up to the rate of gain, just this fabulous, fabulous thrust, all of it so perfectly aligned to your foot. And you’ve got so many revs to play with. And the V8 itself? Dig out the stats and compare it to the dazzling 4.5-litre in the back of the Ferrari 458-Speciale – the numbers are almost identical. And yes, the 918 sings just as tunefully. It has exhausts that jut out the top like airborne trumpets, what on earth did you expect?

What you get is a savage explosion of internally combusted violence, a piercing, strident clarity, it rasps and snorts and bellows and screams. Matching the race feel, the ride is flat and hard – not harsh, just utterly rigid in its control – and the grip just keeps building and building. But snap off the throttle and you need to have your wits about you. The 918 has aggressive lift-off oversteer. It’s tricky to balance and at 1,680kg (or 1,640kg if you have the £60,000 Weissach Package), there’s quite a bit of mass involved when it starts to move, no matter how low the centre of gravity is. Plus, as Walliser points out, you can’t second guess where the electric power is going – the system dictates that.

But otherwise the 918 behaves like a 911 GT3. I can’t help but be impressed with the way it changes direction, the adjustability of the chassis, the accuracy of the steering. It’s so stable, so secure, so sure of itself, so GT3-ish (again) in its mannerisms and capabilities, that I don’t doubt anyone could drive it blazingly fast in any conditions. It makes 875bhp manageable, and that requires genius.

Except for the brakes. And you will be needing the brakes. Not enough initial bite, then too grabby as you get into the meat of the travel. I suspect there are some imperfect algorithms in the regenerative system. Ha, a sentence that could have been lifted straight from a Star Trek script.

But there’s an extra dimension to the Porsche experience. Pull stubby lever into D, and twist dial to select how power is fed about the place. I start on electric and it’s… strange. So quiet I can hear the brake discs skish-skish-skishing in the calipers. It’s just peculiar to twist the key in a hypercar (you still have to do that) and be greeted by nothing more than ‘Ready’ glowing on the dashboard. But that’s the 918 for you – it’s entirely unashamed of its desire to be as efficient as it is scaldingly fast. Over the first few miles I average 8.8L/100km (32.1mpg) and the most alarming thing is the suddenness with which the V8 cuts in. With little flywheel effect, it’s instant on, instant off, and the noise at low revs is guttural and chuntering.

So it’ll cruise as well. Not brilliantly as the seats are firm, the cabin free of padding and insulation and a certain amount of noise and vibration is transmitted back. But it’s easy to manage, straightforward to operate and hugely, hugely rewarding in a wide variety of different conditions. It’s a wonderfully complete all-rounder.

The 918 is blissfully simple to drive. Slightly tight to get into as the conventionally-opening door is small, and not initially that reassuring as the fixed position seat is as upright and pious as a church pew. I’m sure Porsche can give it a more relaxed fit if you want.

There’s a small knurled paddle up beyond your right knuckles – the gearlever – and more knurling on a dial on the steering wheel – the drivetrain mode selector. They’re both a delight to use, coolly aluminium and operating with metric precision. I thought I might be overwhelmed by the centre console. It’s a single piece of curved, touch sensitive glass and has all the same functionality as your phone – pinch to zoom, swipe, double tap. But actually it’s the best in-car system I’ve ever come across.

However, you don’t pay £800,000 to own the same technology you have in your pocket for free with a two-year contract. Well, you do actually. The 918’s brief isn’t as straightforward as the McLaren P1’s (to be the best driver’s car in the world). Here’s Walliser: “We wanted to go to the next step with everything, to see what’s possible with the materials, the carbon fibre, the hybrid, the battery system, but also the cockpit, the functionality in the steering wheel, multimedia, telephone, navigation. It wasn’t just a lap time we were after.”

Sitting in the 918 you can feel the truth of that. The view out’s superb, everything’s a joy to operate and works with a simplicity that belies the complexity underneath.

WHAT SHOULD I BE PAYING?

The main choice is whether to Weissach or not. Apparently 60 per cent of buyers do. The kit costs £60,000 and saves 41kg. The biggest ticket item is the lightweight magnesium wheels (saving 14kg), but as ever, it’s the little things that are more interesting and telling. Ceramic wheel bearings save 700g, a carbon fibre bonnet support is 500g lighter, while carbon shift paddles and leather looped door pulls each reduce weight by 200 grams.

Initial reports suggested Porsche was struggling to sell all 918 cars in the production schedule – hardly a surprise given the volume involved is significantly more than the Ferrari and McLaren put together. But more recently things have looked up. It remains to be seen how it will age over time, but so special is it in both concept and execution, we’re sure long term values will hold up over decades.