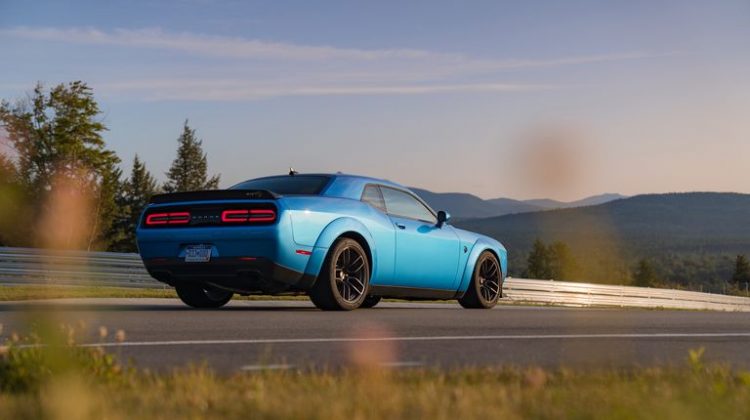 The name Hellcat conjures up images of tire smoke and drag racing, and this ultra-powerful version of the Dodge Challenger muscle car lives up to those expectations. The standard supercharged 6.2-liter V-8 engine—available with either 717 horsepower or a bonkers 797 horsepower in Redeye models—is the Hellcat’s entire reason for existence. Both automatic- and manual-transmission models are offered. Go for the stick-shift for more driver involvement and the automatic if you want the quickest Hellcat possible. Straight-line speed is the Hellcat’s strength; because it’s bigger and heavier than the Ford Mustang and the Chevrolet Camaro, it doesn’t handle corners as well and won’t go around a racetrack as quickly. But if you’re looking for max power and thrust, look no further.

All Hellcats get new standard and optional 20-inch wheel designs. On the inside, there’s new SRT Hellcat badging on the instrument panel, and models equipped with a leather interior feature additional stitching for the dashboard and door panels.

Pricing and Which One to Buy

The widebody version both handles better and looks cooler, so that’s the one we’d choose. But despite the fact that the Hellcat is all about excess, we would not opt for the Redeye version that brings extra horsepower to the party. In our testing, the Redeye wasn’t quicker than the standard Hellcat because its tires couldn’t put the extra grunt to the ground.

The mad scientists at Dodge’s SRT laboratory pulled a Samuel L. Jackson and went all Old Testament with the almighty Hellcat engine. The standard setup makes “only” 717 horsepower, and the version in the Redeye pumps out 797 horses. Paired with the optional eight-speed automatic and Widebody package, our test car roared to 60 mph in 3.7 seconds and completed the quarter-mile in 11.8 seconds at 125 mph. We’ve driven several Hellcats and—as expected—never had trouble tapping into the endless power supply. However, launching the unruly beast straight and true is an exercise in extreme car control. Every model had an insidious growl at startup that builds to a hellish howl under heavy throttle. The Hellcat’s distinct supercharger whine will send shivers down your spine, from either fear or excitement—and most likely both.

These high-performance Challengers might lack an incredible track attack, but they’re quick as hell in a straight line and handle well enough to hustle down twisty back roads—provided your heavy right foot knows when to let up. Although the Widebody package adds wider wheels and tires for more grip, it didn’t convince us that it’s ready to corner with the Shelby GT350 or the Camaro ZL1. The widebody Dodge is composed at the limit, but its electrically assisted power steering (the regular Hellcat has a hydraulic system) is still slow to react and doesn’t provide the ethereal feedback of its track-focused rivals. Instead, switching between the three steering settings feels more like choosing among varying numbness levels. Still, the Hellcats make amazing speed between corners, so their powerful Brembo brakes will get a big workout.

Relax. The Challenger Hellcat doesn’t power-slam gas like a competitive drinker—at least, not more than its competition. It has a double-digit EPA city rating, and the last version we tested wasn’t far off its 22-mpg EPA highway fuel-economy figure in our real-world testing.

The Challenger interior was redesigned for the 2015 model year with a driver-centric layout, straightforward switchgear, and better materials. The SRT twins have standard leather finery, unique badging and gauge colors, and heated and ventilated front seats. Despite its roomy cabin, the plastics still look cheap, and visibility to the rear is poor.

Although it has the same trunk volume as the BNW M4, the Dodge held two more carry-ons in its trunk (six) and an impressive 15 with the rear seat stowed—three more than the GT350. None of the cars we tested were particularly adept at storing small items, but the Challenger at least has a big center-console bin, and there’s a useful slot to stick a smartphone.

Both models boast a Uconnect infotainment system that is simple to use and filled with features. These include navigation, a bumpin’ stereo, Apple CarPlay, and Android Auto. The standard 8.4-inch touchscreen is usefully large and features icons that can be easily selected with a finger. There are volume and tuning knobs for quick audio-system adjustments. While the navigation responds quickly to inputs with a large onscreen keyboard, the map graphics look dated and cartoony.

While neither Hellcat has been fully crash-tested and it underperformed in the test it did complete, the big-bodied coupe is available with a host of driver-assistance technologies. Both models have standard rear parking sensors, but most other safety equipment costs extra and not all of it is available on the Redeye. Key safety features include:

The Challenger’s coverage aligns with domestic rivals. Compared with BMW and Porsche, it has less limited protection but a better powertrain plan.